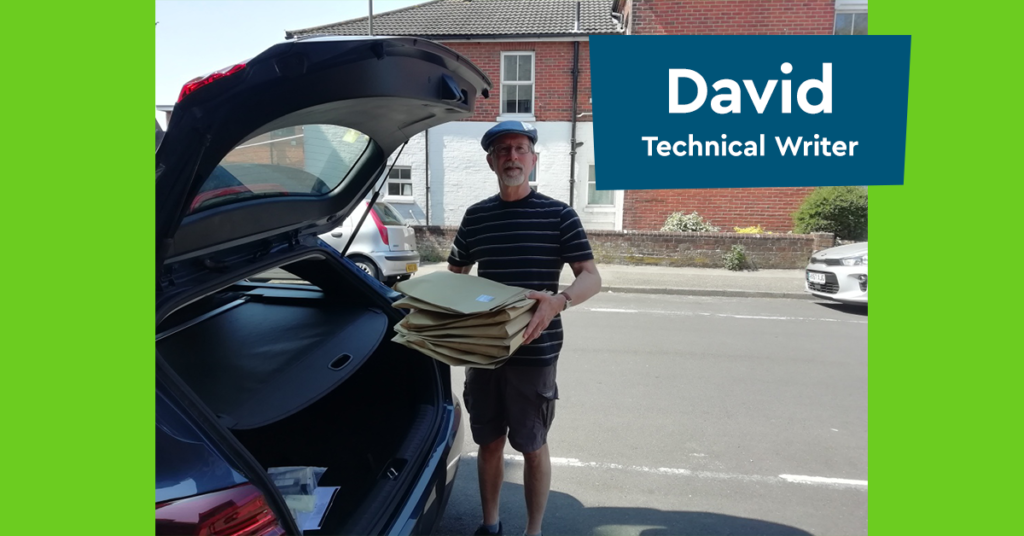 This is David. He’s a technical writer here at RingGo. Throughout the crisis, he and his wife, Sally, have been doing lots of outstanding volunteer work in their local community, including picking up food and prescriptions for those who are unable to, as well as being there for those who may be feeling lonely.

So, what’s he doing?

David and Sally are registered with Eastleigh One Community, an organisation that co-ordinates volunteer activities in the Borough of Eastleigh.

As part of his volunteering with Eastleigh One Community, David has done weekly grocery shops for elderly people in his community and giving vulnerable people who may be feeling lonely someone to talk to. There’s a 95-year-old gentleman who’s partially sighted, hard of hearing and can’t get out of his home that David has regular phone calls with. He’s also picked up prescriptions for people that have been forced to self-isolate and delivered activity packs for young carers.

Outside of his volunteer work for One Community, David frequently rings elderly friends and relatives for a chat, and buys milk and a newspaper for an elderly friend who’s self isolating, in addition to picking up her prescriptions once or twice a week.

Sally has managed to co-ordinate donations from their local church community to give to their local food bank, who are in desperate need. David and Sally collect the donations on foot and then have a conversation (at a safe distance) with those who have kindly donated. This enables people who don’t see many people – if anyone – to have a chat and see a friendly face. They then take the donations to the food bank, about a 5 minute walk from their house.

David gets his exercise by going for a one-hour walk every day, including collecting food donations.

David likes that things are more quiet, with less traffic about and bluer skies. He also loves the togetherness and community spirit encapsulated by everyone standing out the front of their homes and clapping for the NHS at 8pm on Thursday evenings.

David would like to keep the strong sense of community that’s been felt lately, and would like people to remain to be more considerate of others, with less greed and materialism in the world. He’s also looking forward to being able to get out and about again as normal.

At RingGo we’re doing all we can to help during these extraordinary times. We hope this story has inspired you, to think about what you could do too.